When it comes to selecting what models we build, there are two schools of thought: Some builders prefer to build what they know; some model builders prefer to build something different. Our friends at the Pocher works seem to have been well acquainted with this phenomenon, and they did what they could to satisfy both instincts by offering some of the rarest examples of the world's most iconic automotive subjects. Quite clever, when you consider it from this point of view, but it is a strategy that has had people scratching their heads around the world and for decades. Americans wonder why there are no Pocher Packards nor Pocher Duesenbergs, and the Pocher enthusiasts from England must wonder why, of all the Rolls-Royces in the world, why one headed for India? The Alfa coupe makes some sense for our Italian friends looking for a thorough selection of 8c2300's, but they must wonder what became of their beloved and immortal 2.9. German enthusiasts may be the most conflicted of the Pocher builders, having been given two examples of the same controversial chassis carrying three different bodies, two of which are one-off customs. Ironically it is the French enthusiasts who are given an embarrassment of riches: two iconic examples of the same heroic chassis, neither of which has much to do with the cars for which Ettore Bugatti is justly famous. As with so much that is priceless in this tired old world of ours, this confusion must be relegated to the category of a great mystery.
The happiest among us may be those who spend more time asking "why not?" rather than "why?" and Andrea Righetti must surely be an example of the wisdom of such an approach when it comes to building Pochers. Perhaps living in Switzerland offers some perspective on the subject, although some of us can nearly swoon at the prospect of a Pocher Hispano-Suiza. Whatever led Andrea to the Pocher Bugatti, it is clear that the angels of inspiration did a thorough job of leading the project to a fine conclusion.
It can be argued that the Pocher Bugatti kits come closest to the ambitious goal of offering the world's finest automotive kit. The Rolls-Royces may be more complex, but they are also more troubled; the Mercedes may be more famous and familiar, but the Bugattis are flawlessly engineered and offer the builder access to one of the world's great exotic automobiles. And what the Bugattis lack in popularity when compared with Alfa Romeos, they make up for in presence-an 18"-long Alfa may be 1:8 scale, lording it over the tiny scales of 1:43 and 1:25, but the Pocher Bugatti's 26"length puts any 1:8 scale Alfa in the shade. In short, a Pocher Bugatti makes the most of its scale and owns any shelf it is put on.
The Surprofile version-"fastback" in American parlance-carries on the Pocher tradition of building replicas of the rarest of the rare. While it can be claimed that there may have been four or five of the three-box Profile coupes built on the Type 50 chassis,
there is little doubt that there was one Surprofile body built, and after the War it was remounted on a Type 46 chassis with wire wheels. It was that body that was later rebuilt and mounted on a proper Type 50 chassis by the French National Museum where it resides to this day. The point of this tangled provenance is that for the model builder, there is plenty to argue for freedom of design, and Andrea Righetti has taken full advantage of that freedom.
The builder's choices of colors and materials are delightful and the result is that one can 'see' the model and not be confined to seeing what one expects. Without expectations, the design can be appreciated for its intrinsic qualities: Sweeping fastback with split rear window; Jean Bugatti signature curve of the perfectly named 'wings'; and thrusting, imperial hood. It is no mistake that the Type 50 was often referred to as the 'petite royale' in a reference to the gigantic eight Bugatti Royales which rolled on 36"diameter wheels and were meant for royal owners, and Righetti's version lives up to the tradition. 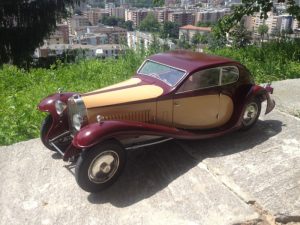 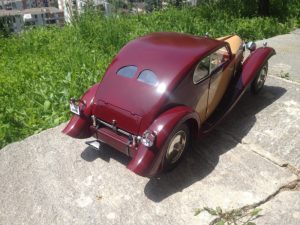 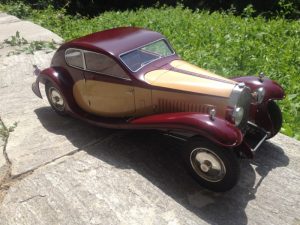 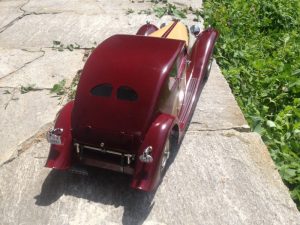 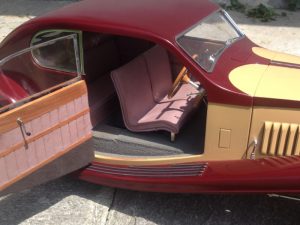 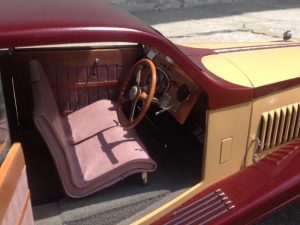 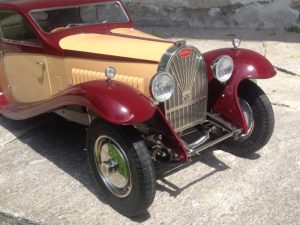 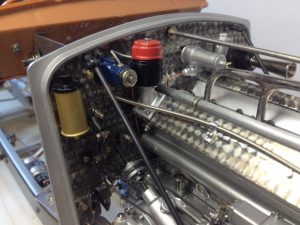 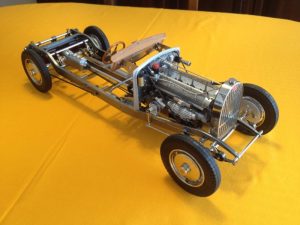 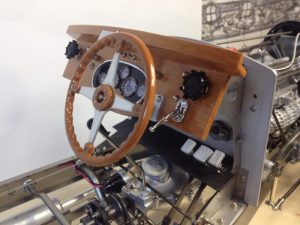 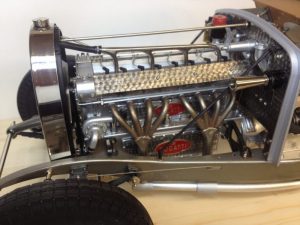 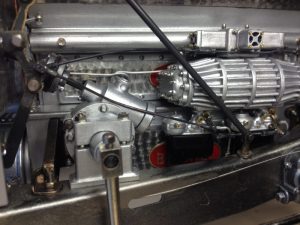 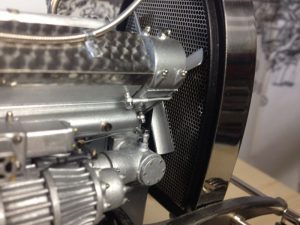 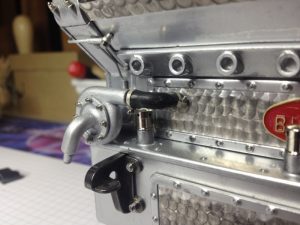 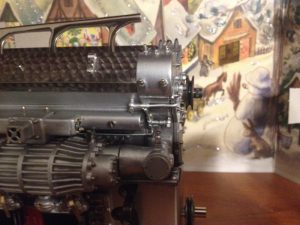 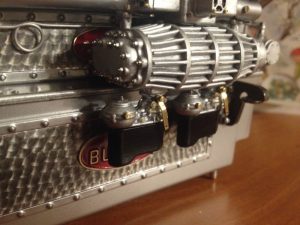 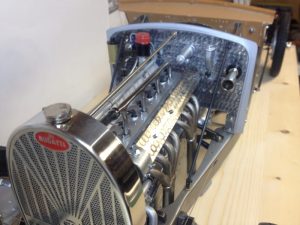 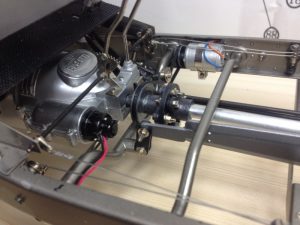 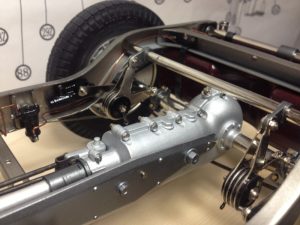 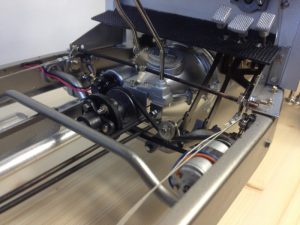 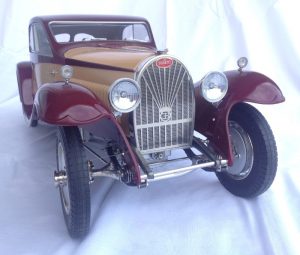 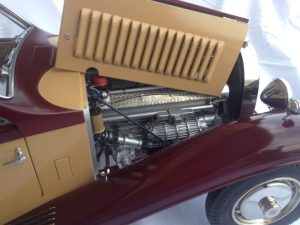 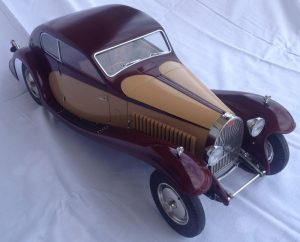 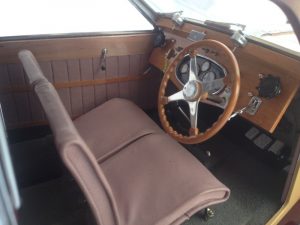 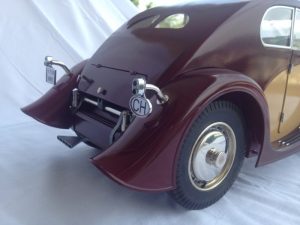 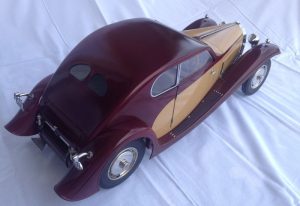 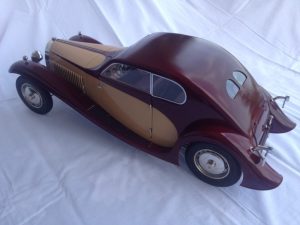 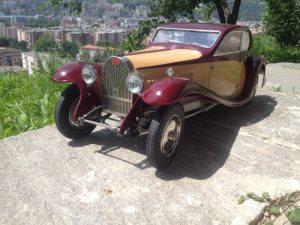 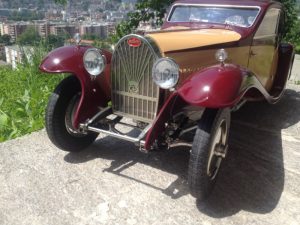