When asked which Pocher kit to build for the first time, our policy has always been to recommend the Bugatti. Not only is the kit the most technically developed of all the Pocher classic car kits, but it is also one of the best models 'on the shelf', which is to say that it is above all else handsome-the doors and hoods fit; the proportions are correct; and the engine and running gear are good looking right out of the box. Add this to the facts that the interior is among the easiest to upholster, and the door latches and hinges are nearly fool-proof. In short, the Pocher Bugatti kit is a wonderful introduction to large-scale model car building. Rarely do we hear the familiar lament that the builder was defeated by either the lack of instructions or the orneriness of the components. In the end, the big challenge is a familiar one-getting a good paint job. Our friends at Pocher addressed that issue with their famous polished body panels. Even in raw plastic, a Pocher Bugatti can make for a handsome display.
From the beginning, we have tried to show that painting a Pocher classic can transform the model from a toy into a show piece, and we are pleased to see that builders like Michel Ronzetti have proven us correct. But anyone who has painted a car-no matter what size or scale-will be able to attest to the struggle of picking a color. Ask most restorers about picking colors, and nearly all of them can describe memorable struggles. Models, despite their reduced size, offer similar challenges.
An additional challenge with the Bugatti kits is that, like the Star of India Rolls-Royce, the prototypes threaten to kill creativity. Of the handful of coupé bodies erected on the Type 50 chassis, only three or four were of the "Profilé" style, with the distinctive laid-back windshield and famous Jean Bugatti-designed front wings. Of this tiny number, only two survive, one in yellow and one in red, and the red one started as a Type 46 (single camshaft, wire wheels). Many Bugatti enthusiasts can recite the chassis numbers of these cars, which only adds more pressure to model builders who are sensitive to such things. It is a delight to see a Type 50 built by someone willing to take a chance on painting a Bugatti 'outside the box', as the current phrase goes. Instead of changing the color sweep on the body, Ronzetti has chosen a much more unusual approach by substituting a color for the black background. The result is that the model is unique yet maintains a gratifying connection with its era. A matching interior pulls the design together, and the result is harmonious yet striking.
Careful attention to the under-hood finishes and to the dashboard assure that the model rewards close inspection. Only the shiny tire treads give a hint that the photos are of a miniature and not the full-sized car--and even there it can be argued that the cars in museums often have such ancient and un-used tires that the treads are as shiny as the sidewalls! All in all, this model speaks volumes for the quality of the Pocher kit and the eye of its builder. Monsieur Ronzetti has managed to retain the drama of the traditional color sweep while creating a unique model. 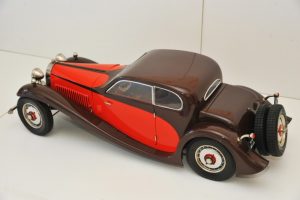 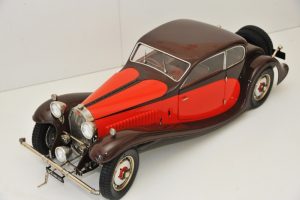 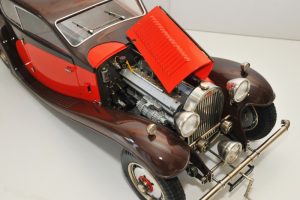 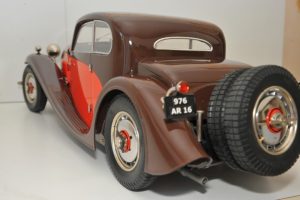 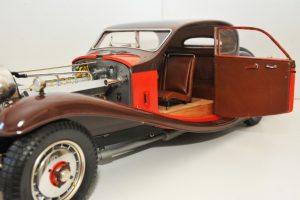 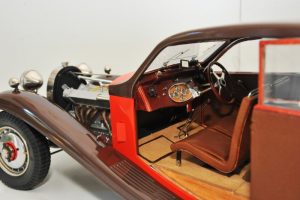 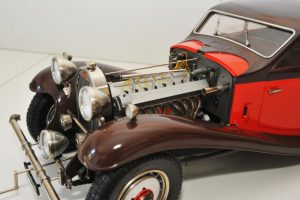 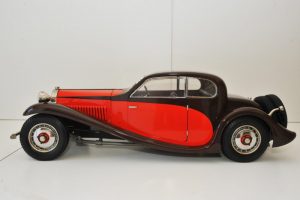 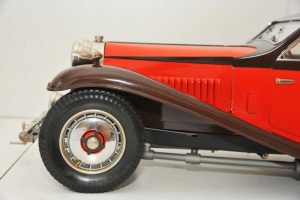