We supply aftermarket Pocher parts of unsurpassed quality, so you can pursue your passion at a larger scale

Created more than 40 years ago with amazing detail, Pocher Classic models have become coveted collectibles for modelers and automobile lovers all over the world. At Model Motorcars, we understand your drive to improve your Pocher experience, bringing you the best catalog of proprietary parts and materials for over 25 years. From all imaginable parts to books, CDs and tools to help you build and customize the car of your dreams, we have you covered. We pride ourselves in providing the best researched, manufactured and finished parts the world over.

Click on the icons below to begin your journey... 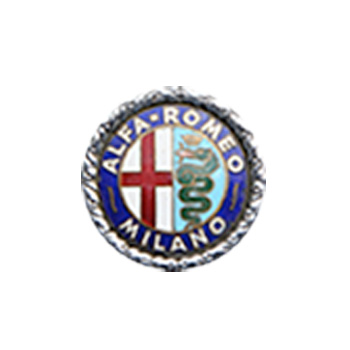 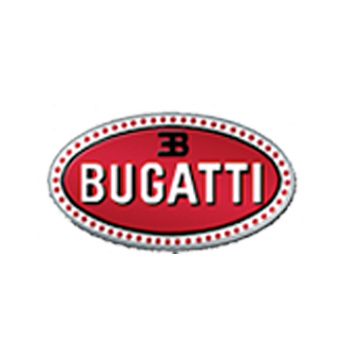 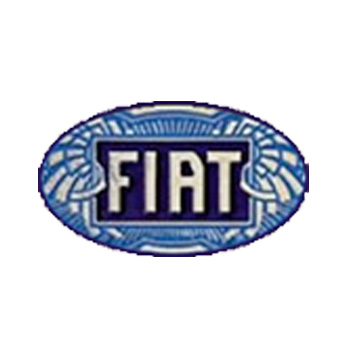 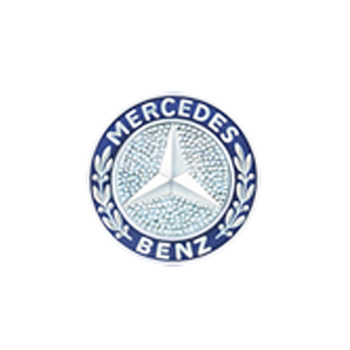 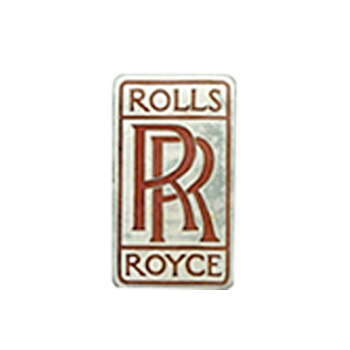 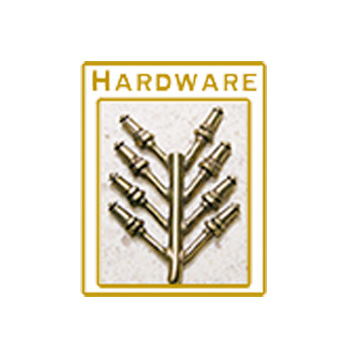 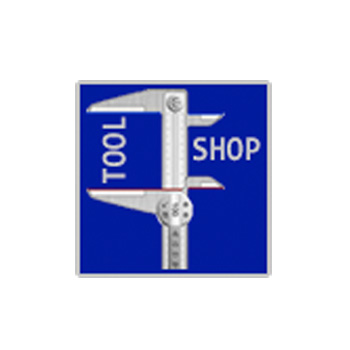 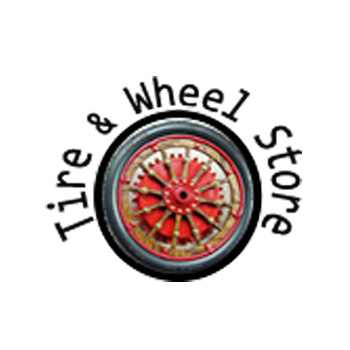 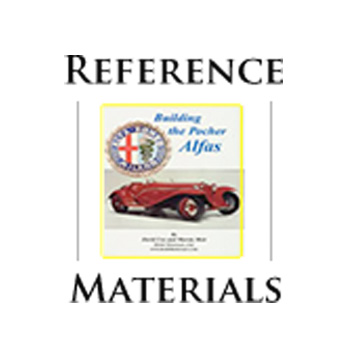 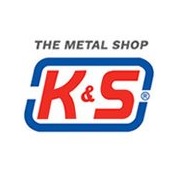 We have joined the 21st Century! We’re now on YouTube!

Use the links below to enjoy some amazing videos...

Watch the history of Pochers and Model Motorcars

Watch the second part of the amazing tales of a 9+ year scratch-built Alfa Romeo... 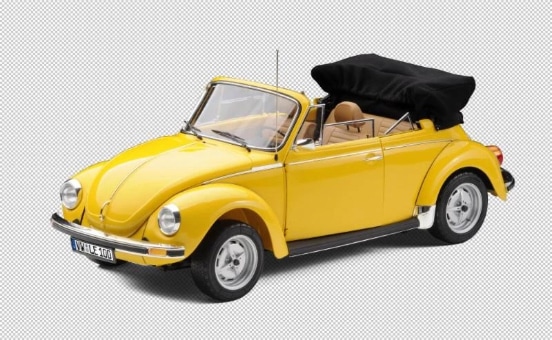 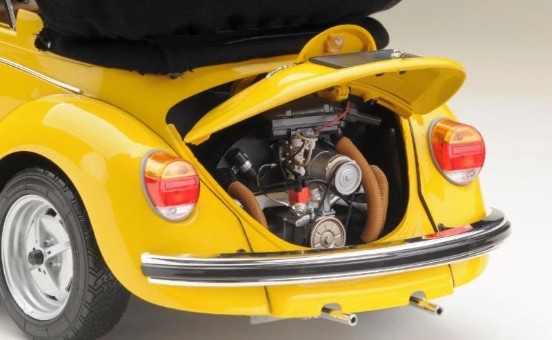 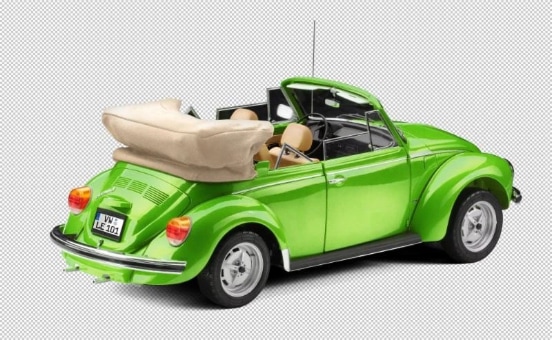 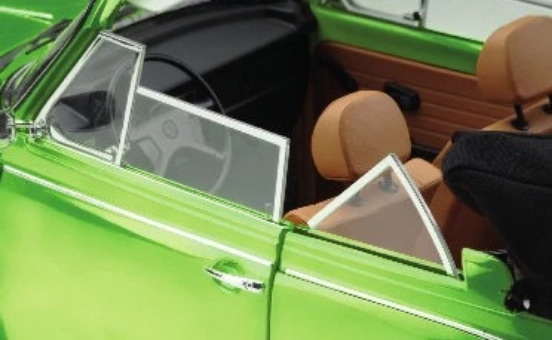 Due to the Coronavirus, some of our overseas suppliers are closed. We will continue selling those imported parts until they’re gone.

Hopefully, this crisis will be over soon, and we will be able to re-stock.

Many years of building models have taught us how small components can either provide a visually-enhancing scale reference or throw the model off completely. That is certainly the case with wiring, which is often overlooked or at least left as an afterthought. And, given the lack of "true to scale" wiring usually at hand, we end up using wire that is way too thick. Big mistake! A thick wire is difficult to handle, insert or hold, and most importantly makes our engines look toyish! For perspective, Pocher usually provided 0.04" wire, which would translate into a real-life 0.32" mammoth.

To correct this, we scouted the world over to find adequate wiring for our beloved 1:8 scale models, and finally succeeded! We now have 0.02" (0.53 mm) wire, which translates into an adequate real-life 0.16" wire. Bingo! You can use our wire for detailing purposes or even for electrically powered installations. We sell 3 ft. lengths in 6 different colors. Put that final touch to your beloved model and give it that convincing look! 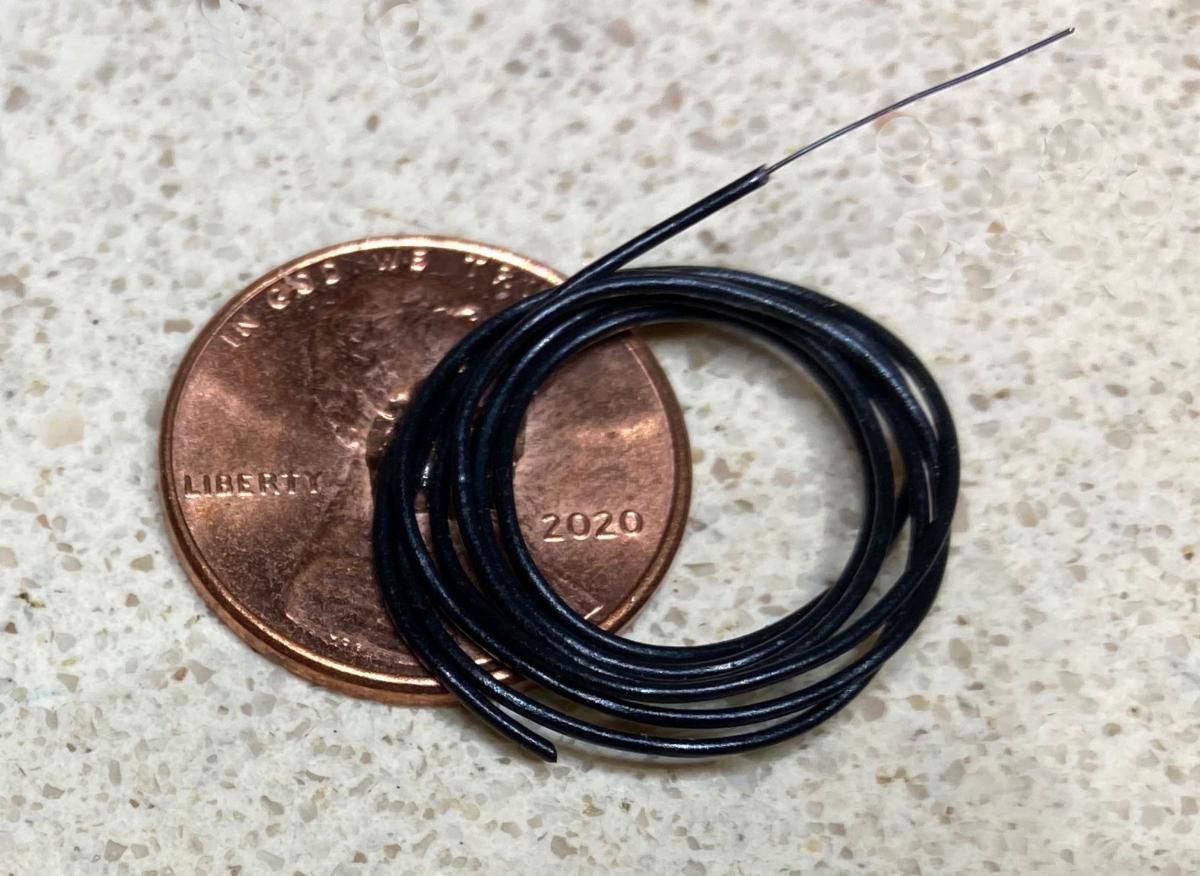 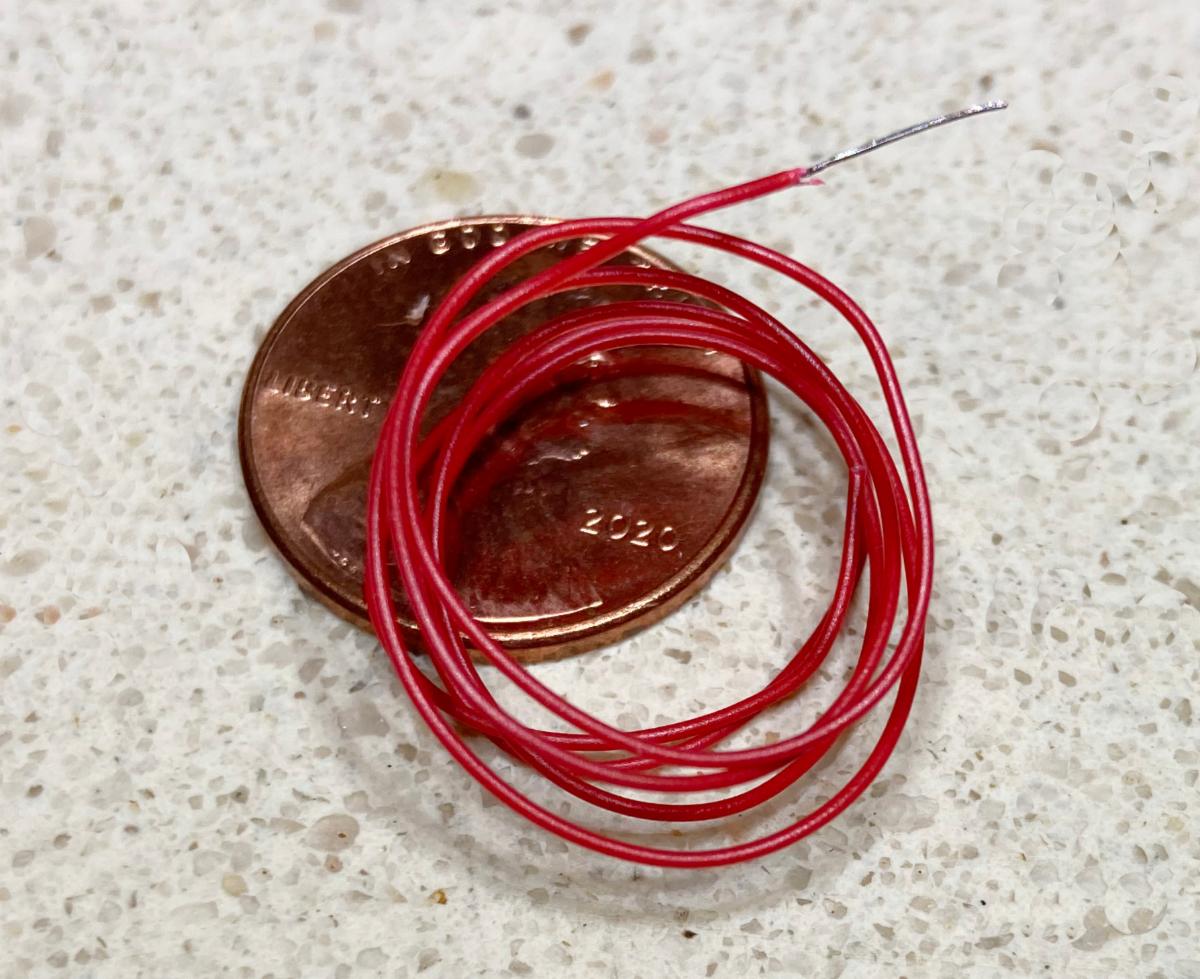 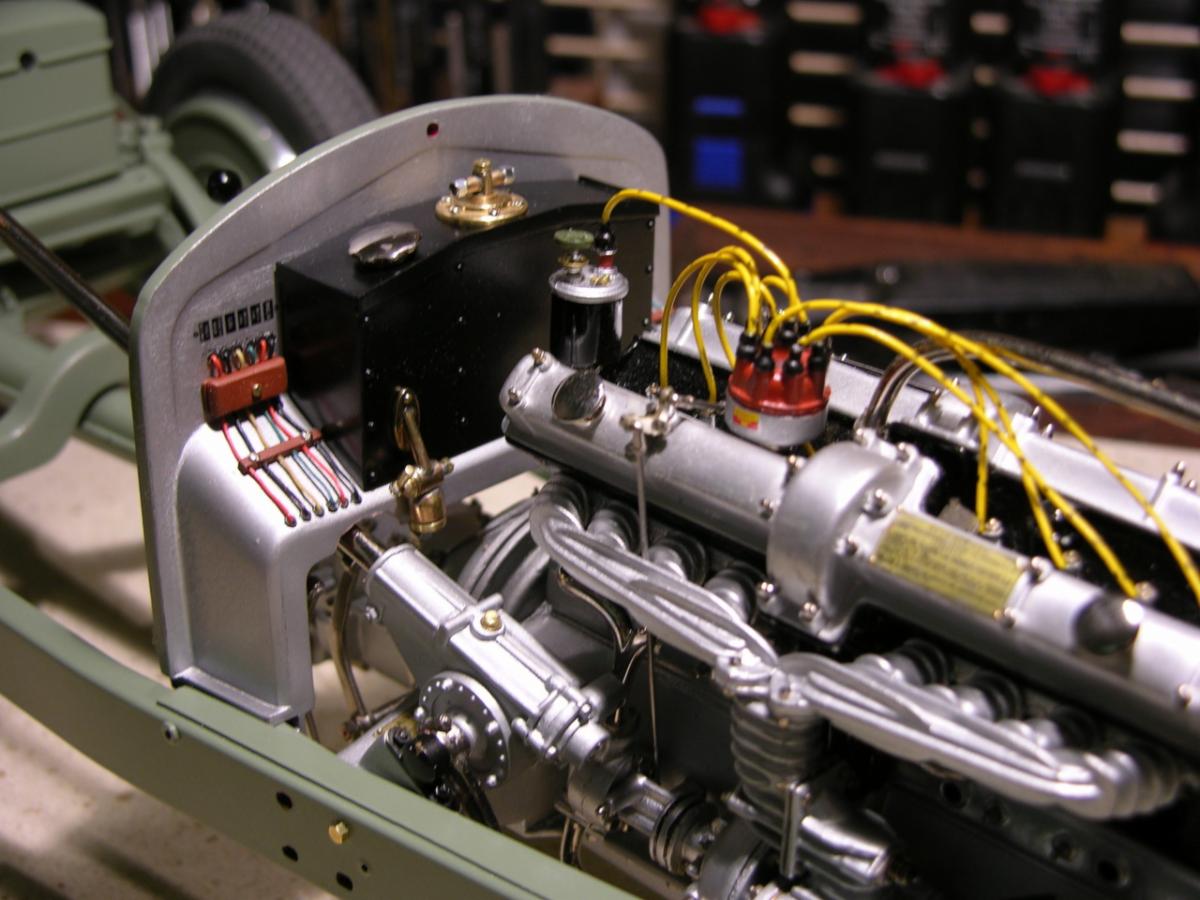 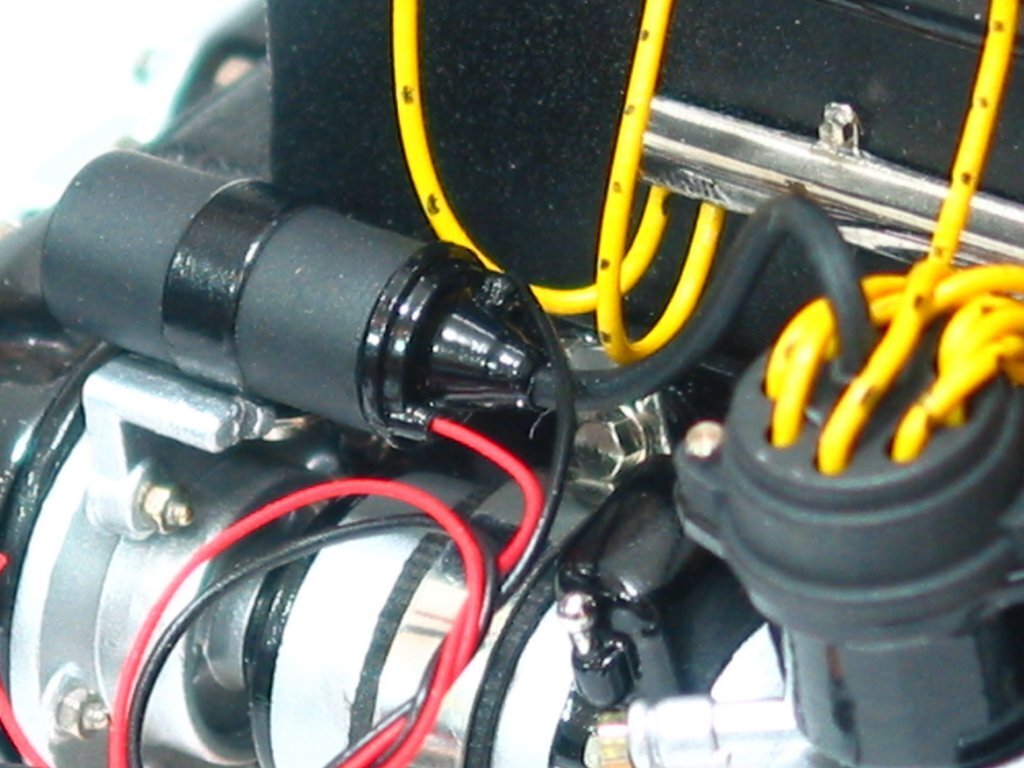 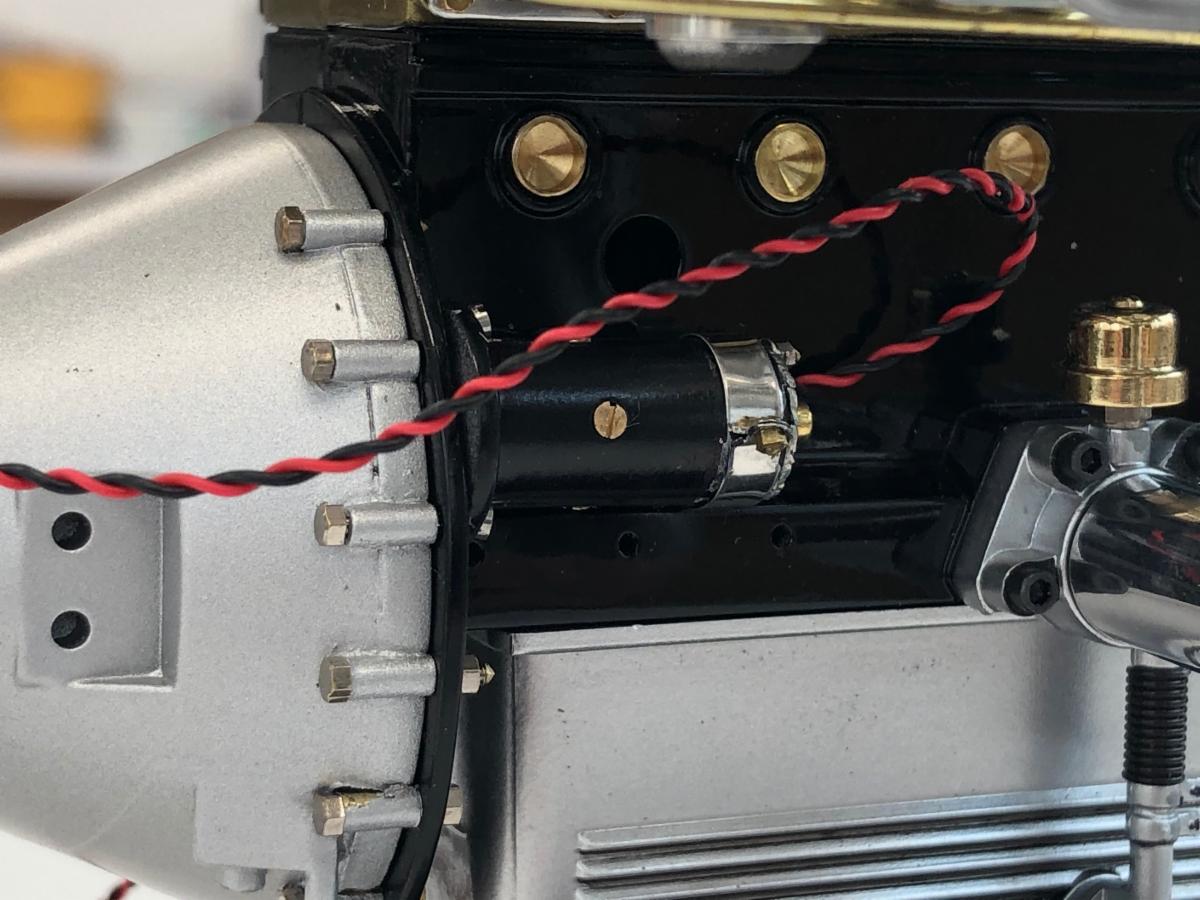 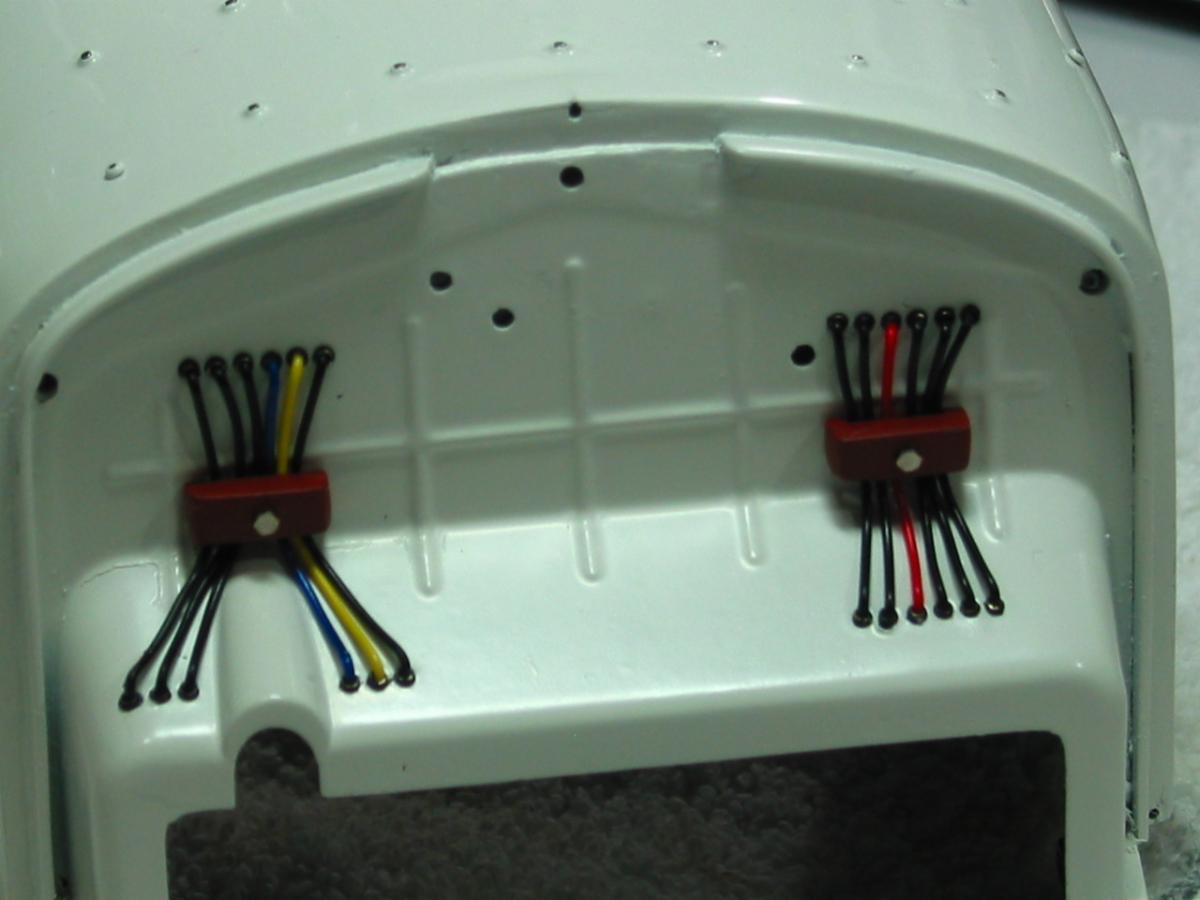 AN IMPORTANT NOTICE TO OUR VALUED CUSTOMERS:

Shipments of new orders may experience temporary delays. You may continue to browse and place orders on our site, but please be advised that it may take longer than usual to ship your order. We sincerely appreciate your patience. Thank you for continuing to support our small business in these challenging times! 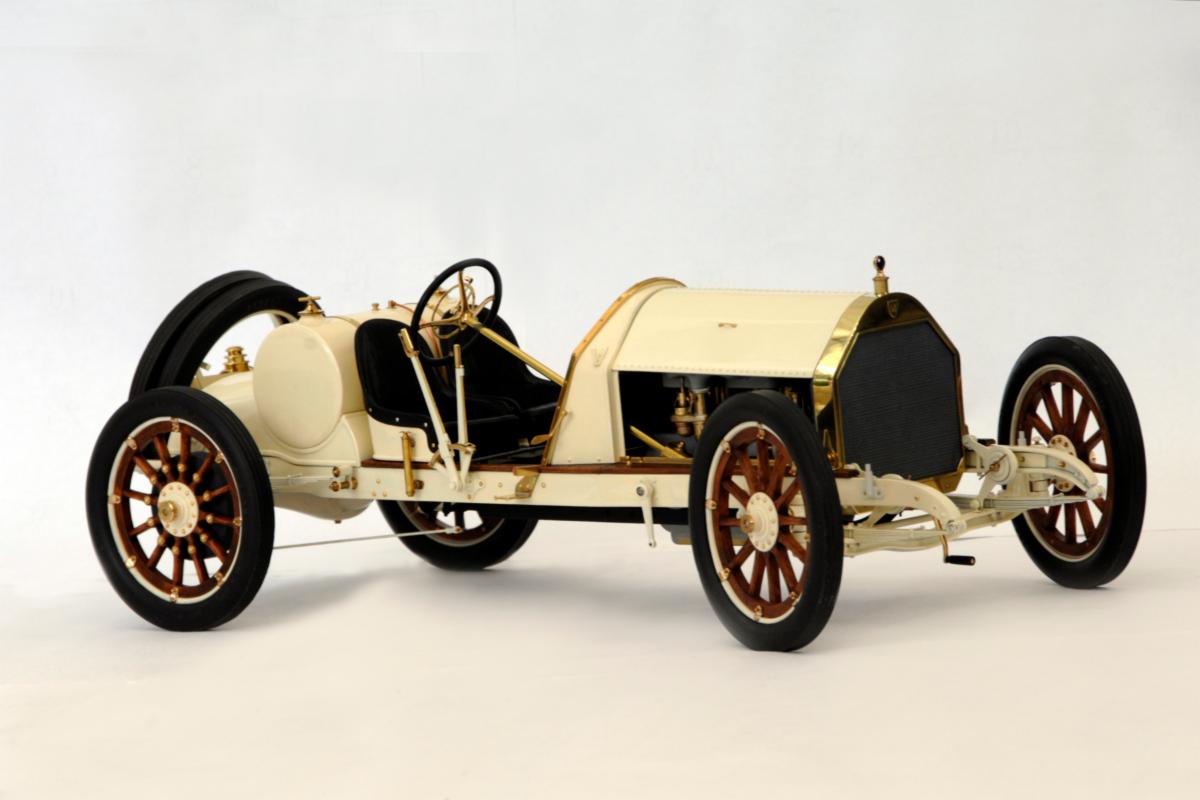 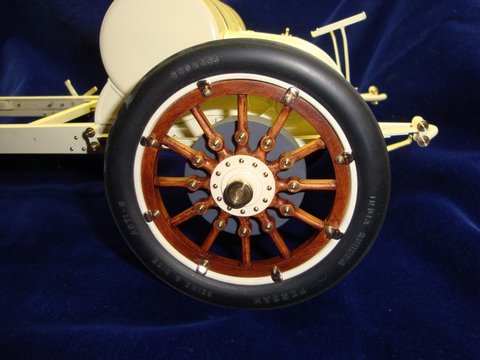 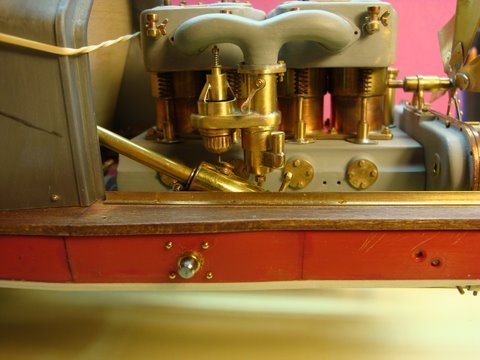 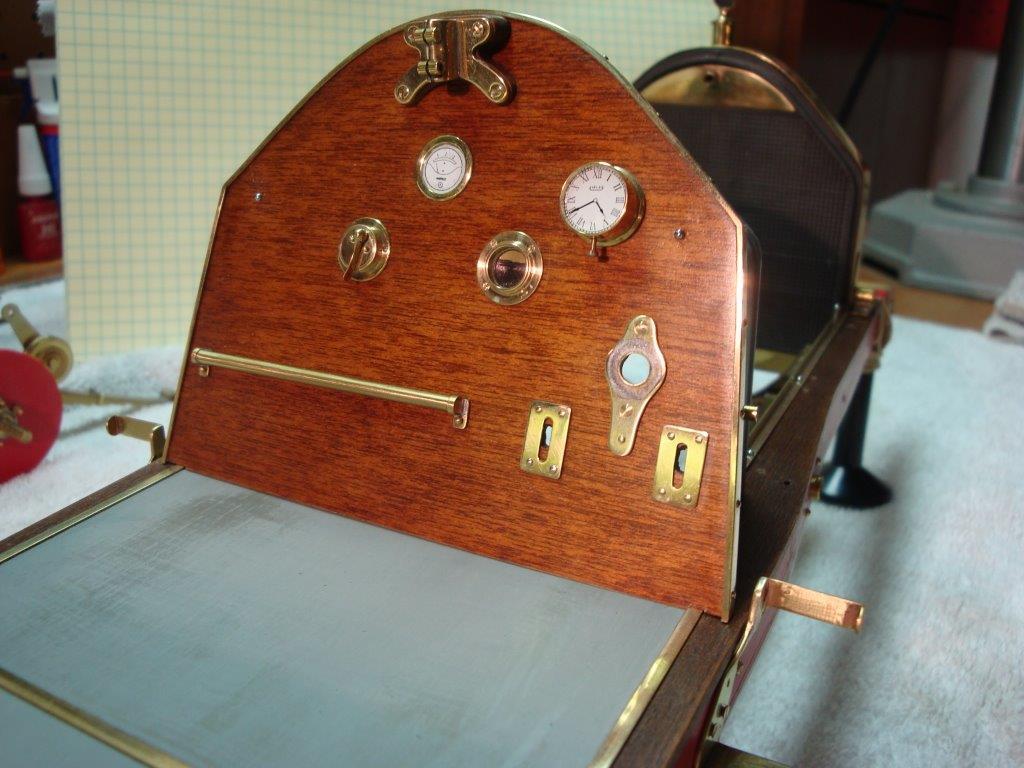 The name Mercer is prevalent in the racing record books in America in the early 1900s, however many of their great motoring accomplishments have faded with time, but still deserve recognition. Hence, the motivation for this model as a small token of remembrance of a colorful and eventful motoring past.

The Mercer company, located in Trenton New Jersey, was founded by the Roebling family of Brooklyn Bridge fame. They envisioned a motor car that was quick, and would impress, and appeal to the sporting gentlemen of the day. It had to be something different, requiring a fresh approach to design and thinking. This undertaking was given to a very forward thinking engineer named Finley Robertson Porter. The Roebling company gave him the freedom required to create an automobile that followed sound engineering principles, yet exercised the simple principal of power to weight ratio. Most automobiles found in competition at the time, were merely stripped down touring cars powered by even larger massive engines. Porter's image was that of a smaller yet lighter engine. He developed a relatively small T- head four cylinder engine with a mere 4.9 liter capacity. This also allowed the chassis to be lightened. It was designed to be basic, without the additional strength necessary to carry a heavy touring car body. The initial design of the Raceabout 35 resulted in an automobile that was destined to make history. An automobile that truly was America's first sports car, one that only required the removal of fenders and headlights to become a highly competitive, well balanced racer suitable for both wooden board tracks and road courses. This simple formula was so successful that it did not take long for others to copy. It was most notably the Stutz company who created a very similar sporting model. Competition between the two rival firms was fierce. One would say, "There is nothing worser than driving a Mercer". The other would say, "You have to be nuts to drive a Stutz". A few Mercers remained competitive years after they were deemed obsolete. Horsepower was increased with various engine modifications, some switched to a four instead of three speed transmissions. Engines were frequently moved back a few inches, and some extended the wheelbase a few inches to further improve balance and handling at higher speeds. The 1:8 scale scratch built Mercer Special is based on one of the later modified Raceabouts that competed regularly until the outset of the Great War.

The as yet unfinished Mercer model project began by obtaining drawings of a Raceabout from the Gerald Wingrove collection. Once underway it became clear that these were exceptionally good drawings, but not blueprints suitable for the model. This information deficit was overcome thanks to the kind assistance of personnel at the REVS Institute, and The Collier Collection in Naples Florida. A full day was spent making hundreds of measurements, notes, and photos of their exceptionally well kept Mercer Raceabout. A highly modified Pocher Fiat frame was used as a starting point for the model, however in retrospect it would have been easier to create one in brass. A Pocher Fiat front axle was modified and used as it is very close to the Mercer design. All other components were scratch built from brass, copper, wood, and alloy. The rear lamp was fabricated from .44 &.357 Magnum shell casings. Individual wooden spokes were laser cut from fine grain holy wood thanks to Marvin Meit. The spokes were then shaped one by one and assembled and attached without the use of glue. Brass nuts, bolts, wheel rims, tires, and hubs thanks to Model Motorcars as well. Without their help, and parts, the project would not have been possible. Engine paint, wiring, and linkage still need to be finished, along with bonnet strap, spare tire straps, license plate, and hub nuts.

We have now opened the Scale Hardware Model Museum. Featuring all scales and subjects!

You may have noticed the addition of several videos to the Museum. It's very easy with all the new devices and certainly adds to the presentation of your beautiful models.

If you have photo or videos posted and they need corrections, please contact us! 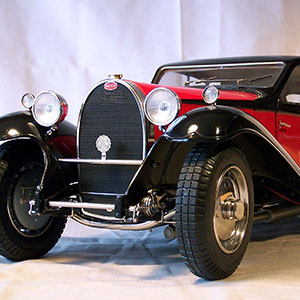 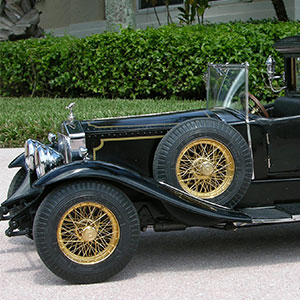 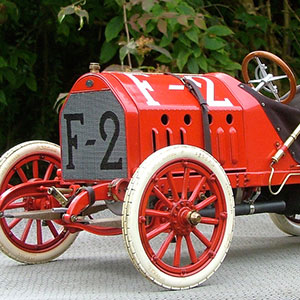 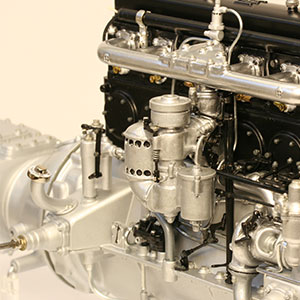 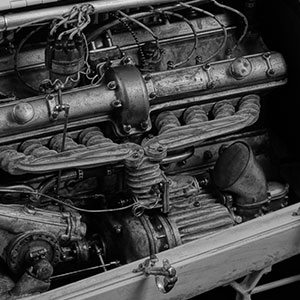 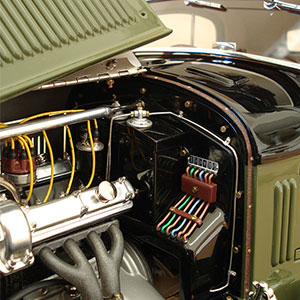 We hope they do the same for you!

We are proud to partner with industry leaders